It’s no secret that the Apple ‘inspired’ a whole lot of brands to launch true wireless earbuds. Most brands quite blatantly copied the look and design from Apple and made their products look like blatant AirPods clones. It looks like being an AirPods clone could lead to some ‘trouble’. At least that’s what happened with OnePlus Buds. According to a report by TechCrunch, the US Customs and Border Protection (CBP) seized counterfeit Apple AirPods. In a press release posted on its website, CBP posted images of the so-called counterfeit Apple AirPods, which turned out to be OnePlus Buds.

The press release states, “On August 31, CBP officers seized 2,000 counterfeit Apple Airpod Earbuds from Hong Kong destined for Nevada at an air cargo facility located at John F. Kennedy International Airport. If the merchandise were genuine, the Manufacturer’s Suggested Retail Price (MSRP) would have been $398,000.” 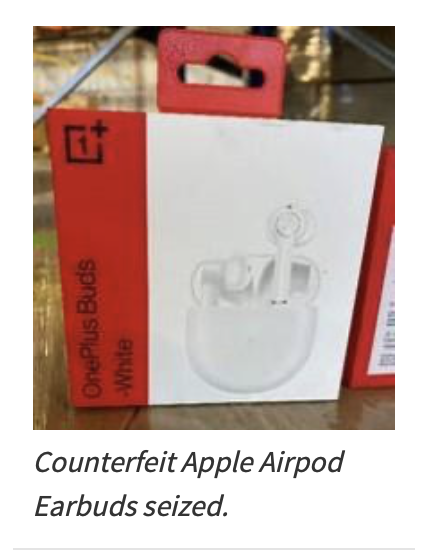 The images posted along the press release, however, clearly show that the seized earbuds are none other than the OnePlus Buds. The TechCrunch report states that they reached out to CBP officials about further comment but got no response.

OnePlus Buds were recently launched by the Chinese brands and do have a resemblance to the Apple AirPods. Perhaps it’s the white colour that makes people believe other brands’ wireless earbuds are nothing but AirPods clones. Apple is one of the few brands that has not launched its wireless earbuds in any other colour except white. The OnePlus Buds were recently launched at Rs 4,990 and comes in three colour variants: white, Nord blue and grey.

When it comes to making AirPods-lookalikes, one can see the market flooded with them. The Realme wireless earbuds look very much like the AirPods as do the ones from Vivo and Oppo. It’s a bit ironical as when the AirPods were first launched several years back, the design was quite ridiculed.