MUMBAI: The Bombay high court on Wednesday stayed the BMC‘s demolition of a part of actor Kangana Ranaut‘s upscale Pali Hill Bungalow in Bandra and called the conduct of the corporation “highly deplorable”.

The order came at an urgent hearing within hours of the civic squad launching the demolition over alleged unauthorized construction.

A bench of Justices S J Kathawalla and Riyaz Chagla said that “though the manner in which the Brihanmumbai Municipal Corporation (BMC) proceeded to commence the demolition prima facie … smacks of mala fide”, it would still give an opportunity to the corporation to explain its conduct through an affidavit by 3pm on Thursday.

Kangana, who at the time of demolition was not in Mumbai, had approached the HC through her lawyer Rizwan Siddiquee to prevent the “illegal, arbitrary and mala fide” demolition. She claimed that the BMC action was “a fallout over the difference of opinion with certain influential people operating in the administration and the Maharashtra government.”

“From the works set out in the notice, it is clear beyond any doubt that the works which are ‘unauthorised’ have not come up overnight. However, all of a sudden, the corporation appears to have overnight woken up from its slumber, issued notice to the petitioner, that too when she is out of the state, directing her to respond within 24 hours, and not granting her any further time, despite written request, and proceeding to demolish…on completion of 24 hours,” the high court observed.

The HC further said, “We cannot help but mention here that if the MCGM would act with similar swiftness qua the numerous unauthorized constructions in this city, the city would be a completely different place to live in.”

The HC found the BMC at fault especially since the civic body had filed a caveat before it expecting Kangana’s petition.

When the matter was called out at 12.30pm, no lawyer appeared for BMC initially and Siddiquee said that 40 per cent of the premises was already demolished.

The BMC’s in-house lawyer then said they did not have the petition copy and no officer was present with her. The HC said that the BMC was “trying to waste” the court’s time and “in the meantime completing the demolition.” Hence, it orally instructed the BMC lawyer to immediately convey its direction to the civic chief to stop the demolition in view of the pending petition. 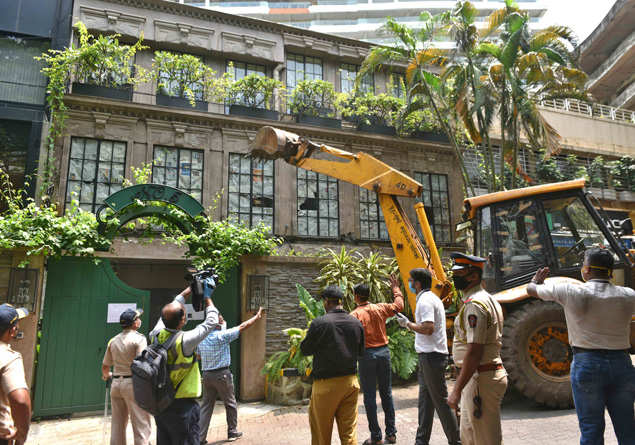 The HC was told that the civic chief Iqbal Chahal’s cellphone was “continuously switched off”. Ten minutes later, the message was conveyed and the demolition stopped. Senior counsel Sakhare appeared on behalf of the BMC around 15 minutes later.

The HC told Sakhare that “such conduct on the part of the MCGM is totally unacceptable to the court.”

Sakhare immediately brought an Assistant Municipal Commissioner as well as the executive engineer of H/West ward who on being questioned by the HC said that a building mukadam had on September 5 noticed some work going on in the bungalow and informed other civic officials who then visited the site on September 7 and pasted the demolition notice on Tuesday.

Kangana’s petition sought orders to prevent te BMC from “taking law into their own hands or misusing their dominant position to harass and prejudice her legal rights.”