Kangana Ranaut has expressed that she wants to record her statement in the ongoing investigation of the case of Sushant Singh Rajput’s demise. Mumbai Police is likely to record her statement soon according to PTI. Kangana’s lawyer Ishakaran Singh also confirmed on Twitter that the actress has received a notice from the Mumbai Police at her Mumbai residence and that he has replied on her behalf, assuring that the actress is committed to help in getting justice for Sushant Singh Rajput. 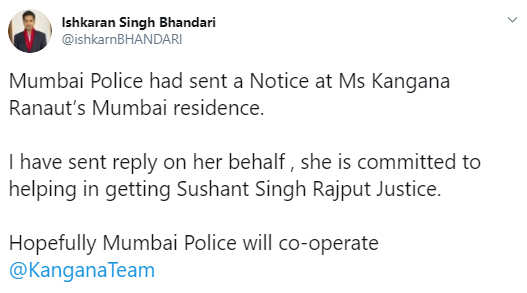 Kangana Ranaut had headed to her Manali home when the nationwide lockdown was imposed and has been there with her family since the past few months. According to a news portal, Kangana’s lawyer has stated in his reply to the Mumbai police that Kangana won’t be present physically to register her statement and that she should be sent the questions that are required to be answered. The lawyer ahd also reportedly requested that an officer be sent to Manali to interrogate Kangana or the actress can record her statement through an electronic medium.

Till now the Mumbai police have questioned over 30 people. From Sushant Singh Rajput’s family to his girlfriend Rhea Chakraborty as well as filmmakers Rumi Jaffery, Sanjay Leela Bhansali and Aditya Chopra have recorded their statements.